SCCCA’s 2015-16 season opened on October 18th with a lively concert by the Northwest Brass Quartet at Wallace High School.  In the opening Bach set, each member introduced her/himself with an individually arranged solo.  That concluded with a chaconne.  Their Around-the-World set featured music of Spain and North and South America.  After the intermission, they reinvented themselves as Square Revolution with more recent compositions such as Stephen Sondheim’s Send in the Clowns and Paul McCartney’s Blackbird.

The Spokane Choral Artists will perform at St. Rita’s Church, Kellogg, at 3 p.m. Sunday, November 8.  This is the a capella group that enchanted Silver Valley concertgoers with its performance four years ago; they will perform with the same flair but a whole new program titled “A Choral Tapestry”.  Some selections will be accompanied by guitarist John Paul Shields, an Andean folk music specialist.  He will be showcased in their highlight selection, “A Procession Winding Around Us” by Jeffrey Van.  Other selections will be from their extensive repertoire of renaissance to modern, liturgical to secular, classical to Beatles to rock.  The 12 members of Spokane Choral Artists include many music educators from throughout the Northwest; they are directed by Max Mendez.

Admission to this concert is through Shoshone County Community Concert Association membership or a $20 single admission at the door. Those wishing to purchase a season membership, which enables admission to the remaining SCCCA concerts this winter and spring, may do so for $30 per person, a temporary reduction. As in the past, children are admitted free to concerts when accompanied by an adult; older students are welcome to attend alone as SCCCA’s guests.

This concert is partially funded by the Idaho Commission on the Arts and the National Endowment for the Arts.

At 7:00 pm on Thursday evening, November 19th, at Kellogg Senior High School gym, the Kellogg High School Jazz Band and Concert Band will join a nationally touring artist, Rob Verdi, in SAXsational.  Kellogg School District Band Director Rick Dickinson and the students have been preparing since spring, working with scores provided by Mr. Verdi, whose “day job” for 27 years is with Disneyland Resort’s house band.  They will rehearse in a Master Class format in the afternoon.  Mr. Verdi has an extensive collection of saxophones.  They range in size from a tiny sopranino to a 6 foot contrabass sax, and include the unusual and rare connosax.   He will display some and perform on a few during this concert.

Selections will include Cartoon Symphony, Gabriel’s Oboe, The Entertainer, Ben’s Blues, Over the Rainbow, and other music familiar to all ages.

Seating will be primarily in the bleachers so bring your cushions.  There will be no admission charge; this concert is SCCCA’s gift to the Kellogg School District music program, its faculty and students, and to the Silver Valley community.

Our 2015-16 season will begin on Sunday afternoon, 3:00 pm, October 18, 2015 at Wallace High School with Square Revolution – edgy, quirky, funky rock-classical instrumental quartet from Spokane, playing jazz, pop, tangos and other Latin music. The concert will be opened by their good friends, the Northwest Brass Quartet, playing traditional classical brass selections. Single admission will be $20/adult or purchase your 2015-16 season Membership for $40/adult. 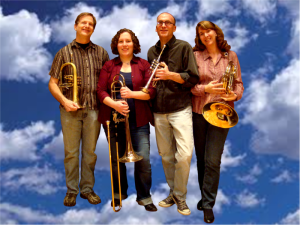 In the dark days before 2014, Square Revolution was a formless mass, begging to be brought into a more substantive existence. The collision of four highly talented, incredibly imaginative brassers took the shape of a renegade band which is not above stealing from far-flung genres to see how far they might fly their shiny objects into the musical realms of wherever they wind up. Square Revolution playlists span the stylistic range from pop and jazz to tango, funk, Latin, and beyond, all drawn from original compositions and arrangements unique to the Square Revolutionaries. But they are not just no-class genre pirates who play off the edge of the map! 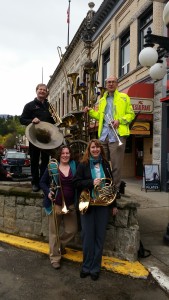 Just ask their friends, the ultra sophisticated Northwest Brass Quartet. They’ve got SqRev’s Bach, and they have a great working relationship – NWBQ promises to open for SqRev! The Northwest Brass Quartet draws its repertoire mainly from the classical tradition, including original music for brass as well as unique arrangements played in a fresh and exciting way.

Appearing as guest artists with the Walla Walla Symphony on December 12th, 2013, Music Director Yaacov Bergman describes the group as “remarkable on all fronts . . . musically, technically, incredibly sophisticated and fun to collaborate with.” 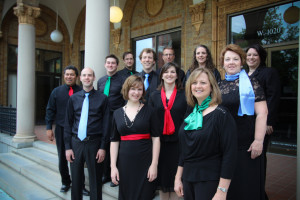 November 8, 2015, Sunday:  Spokane Choral Artists  3:00 pm St Rita’s Catholic Church, Kellogg. The audience was mesmerized on November 6, 2011, when the Spokane Choral Artists performed at St. Rita’s. They have been featured on Performance Today (public radio) and have a major collaboration with the Columbia Master Singers, touring some years. They are “at home” this year and will bring us an all-new performance by an ensemble nearly identical to that of 2011. As before, the selections will range from renaissance to modern, liturgical to secular, classical to Beatles to rock. Experience the human voice in unexpected beauty. Admission by SCCCA Membership or individual adult admission of $20 at the door; students free. 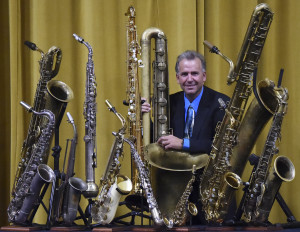 November 19, 2015, Thursday, 7:00 pm, SAXsational, Kellogg Senior High School. The Kellogg High School Band, under the direction of Rick Dickinson, Band Director for the Kellogg School District, will perform along with Rob Verdi, a nationally-touring musician, in SAXsational. Students began preparing in the spring for this wonderful collaboration that will be presented at 7:00 pm, Thursday evening, November 19, 2015, in the Kellogg Senior HS gym.

Mr. Verdi is a member of Side Street Strutters, has a solo program titled Saxophobia, and performs at Disney Land when he is not touring. The concert will include presentations on some of the varied saxophones in Mr. Verdi’s private collection. SCCCA and Kellogg High School are pleased to present a concert exemplifying the emerging trend of combining the polish and refinement of an experienced musician with the freshness of young musicians.

His tour in north Idaho will begin at Orofino High School, sponsored by the Clearwater Community Concert Association; move to St Maries High School, assisted by St Maries Music Boosters; then come to Kellogg. The following evening, he will present his Saxophobia program at the Panida Theater in Sandpoint. SCCCA played a significant role in coordinating these opportunities.

This concert is SCCCA’s gift to the Kellogg students and to the Silver Valley; there will be no admission charge.

Chamber Music Recital – March-April 2016 – Date, Time, Place yet to be determined. We expect to have 1 or 2 musicians from the Piatigorsky Foundation give a recital-length performance which will be open to the community without charge. If possible, there will also be a school-outreach. Cellist Gregor Piatigorsky (April 17, 1903 – August 6, 1976) deeply believed in the healing and inspirational power of classical music. He once said, “Music makes life better. Music is a necessity. It is rich. It is imaginative. It is magnificent. And it is for everyone”.

Opera-tunities – late May 2016 – Date, Time, Place yet to be determined. We expect to have a 1-hour musical theater event suitable for the entire family, as an extension of Opera Coeur d’Alene’s outreach into schools in Kootenai and Shoshone Counties. This will be open to the community without charge.